World War II Remembered: The Generals and the Admirals: French 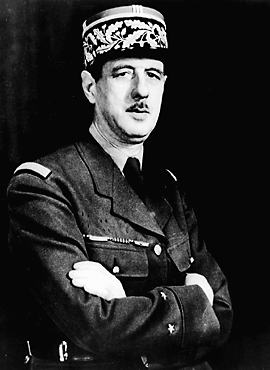 The French general and statesman Charles André Joseph Marie De Gaulle (1890-1970) led the Free French forces during World War II. A talented writer and eloquent orator, he served as president of France from 1958 to 1969.

Charles De Gaulle was born on Nov. 23, 1890, in the northern industrial city of Lille. His father, Henri, was a teacher of philosophy and mathematics and a veteran of the Franco-Prussian War of 1870, in which the Prussians humiliatingly defeated what the French thought was the greatest army in the world. This loss colored the life of the elder De Gaulle, a patriot who vowed he would live to avenge the defeat and win back the provinces of Alsace and Lorraine. His attitude deeply influenced the lives of his sons, whom he raised to be the instruments of his revenge and of the restoration of France as the greatest European power.

From his earliest years Charles De Gaulle was immersed in French history by both his father and mother. For many centuries De Gaulle's forebears had played a role in French history, almost always as patriots defending France from invaders. In the 14th century a Chevalier de Gaulle defeated an invading English army in defense of the city of Vire, and Jean de Gaulle is cited in the Battle of Agincourt (1415).

Charles's great-great-grandfather, Jean Baptiste de Gaulle, was a king's counselor. His grandfather, Julien Philippe de Gaulle, wrote a popular history of Paris; Charles received this book on his tenth birthday and, as a young boy, read and reread it. He was also devoted to the literary works of his gifted grandmother, Julien Philippe's wife, Josephine Marie, whose name gave him two of his baptismal names. One of her greatest influences upon him was her impassioned, romantic history, The Liberator of Ireland, or the Life of Daniel O'Connell. It always remained for him an illustration of man's resistance to persecution, religious or political, and an inspiring example he emulated in his own life.

Perhaps the major influence on De Gaulle's formation came from his uncle, also named Charles de Gaulle, who wrote a book about the Celts which called for union of the Breton, Scots, Irish, and Welsh peoples. The young De Gaulle wrote in his copybook a sentence from his uncle's book, which proved to be a prophecy of his own life: "In a camp, surprised by enemy attack under cover of night, where each man is fighting alone, in dark confusion, no one asks for the grade or rank of the man who lifts up the standard and makes the first call to rally for resistance."

De Gaulle's career as defender of France began in the summer of 1909, when he was admitted to the elite military academy of Saint-Cyr. Among his classmates was the future marshal of France Alphonse Juin, who later recalled De Gaulle's nicknames in school--"The Grand Constable," "The Fighting Cock," and "The Big Asparagus."

After graduation Second Lieutenant De Gaulle reported in October 1912 to Henri Philippe Pétain, who first became his idol and then his most hated enemy. (In World War I Pétain was the hero of Verdun, but during World War II he capitulated to Hitler and collaborated with the Germans while De Gaulle was leading the French forces of liberation.) De Gaulle led a frontline company as captain in World War I and was cited three times for valor. Severely wounded, he was left for dead on the battlefield of Verdun and then imprisoned by the Germans when he revived in a graveyard cart. After he had escaped and been recaptured several times, the Germans put him in a maximum security prison-fortress.

After the war De Gaulle went to general-staff school, where he hurt his career by constant criticism of his superiors. He denounced the static concept of trench warfare and wrote a series of essays calling for a strategy of movement with armored tanks and planes. The French hierarchy ignored his works, but the Germans read him and adapted his theories to develop their triumphant strategy of blitzkrieg, or lightning war, with which they defeated the French in 1940.

When France fell, De Gaulle, then an obscure brigadier general, refused to capitulate. He fled to London, convinced that the British would never surrender and that American power, once committed, would win the war. On June 18, 1940, on BBC radio, he insisted that France had only lost a battle, not the war, and called upon patriotic Frenchmen to resist the Germans. This inspiring broadcast won him worldwide acclaim.

When the Germans were driven back, De Gaulle had no rivals for leadership in France. Therefore in the fall of 1944 the French Parliament unanimously elected him premier. De Gaulle had fiercely opposed the German enemy, and now he vigorously defended France against the influence of his powerful allies Joseph Stalin, Winston Churchill, and Franklin Roosevelt. De Gaulle once stated that he never feared Adolf Hitler, who, he knew, was doomed to defeat, but did fear that his allies would dominate France and Europe in the postwar period.

By the fall of 1945, only a year after assuming power, De Gaulle was quarreling with all the political leaders of France. He saw himself as the unique savior of France, the only disinterested champion of French honor, grandeur, and independence. He despised all politicians as petty, corrupt, and self-interested muddlers, and, chafing under his autocratic rule, they banded against him. In January 1946, disgusted by politics, he resigned and retreated into a sulking silence to brood upon the future of France.

In 1947 De Gaulle reemerged as leader of the opposition. He headed what he termed "The Rally of the French People," which he insisted was not a political party but a national movement. The Rally became the largest single political force in France but never achieved majority status. Although De Gaulle continued to despise the political system, he refused to lead a coup d'etat, as some of his followers urged, and again retired in 1955.

In May 1958 a combination of French colonials and militarists seized power in Algeria and threatened to invade France. The weakened Fourth Republic collapsed, and the victorious rebels called De Gaulle back to power as president of the Fifth Republic of France. From June 1958 to April 1969 he reigned as the dominant force in France. But he was not a dictator, as many have charged; he was elected first by Parliament and then in a direct election by the people.

As president, De Gaulle fought every plan to involve France deeply in alliances. He opposed the formation of a United States of Europe and British entry into the Common Market. He stopped paying part of France's dues to the United Nations, forced the NATO headquarters to leave France, and pulled French forces out of the Atlantic Alliance integrated armies. Denouncing Soviet oppression of Eastern Europe, he also warned of the Chinese threat to the world. He liberated France's colonies, supported the Vietnamese "liberation movement" against the United States, and called for a "free Quebec" in Canada.

De Gaulle had an early success in stimulating pride in Frenchmen and in increasing French gold reserves and strengthening the economy. By the end of his reign, however, France was almost friendless, and his economic gains had been all but wiped out by the student and workers protest movement in spring 1968.

De Gaulle ruled supreme for 11 years, but his firm hand began to choke and then to infuriate many citizens. In April 1969 the French voted against his program for reorganizing the Senate and the regions of France. He had threatened to resign if his plan was rejected and, true to his word, he promptly renounced all power. Thereafter De Gaulle remained silent on political issues. Georges Pompidou, one of his favorite lieutenants, was elected to succeed him as president. Charles De Gaulle died at Colombey-les-Deux-Églises on Nov. 9, 1970.