World War II Remembered: The Generals and the Admirals: Japanese 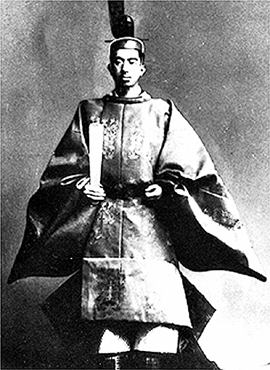 Hirohito (1901-1989) was the 124th emperor of Japan. He reigned during a period of internal turmoil, foreign expansion, international war, and national defeat, and presided over the transformation of the Japanese monarchy into a purely symbolic institution. As the occupant of Japan's throne for 63 years, he was the longest living monarch in modern history.

Hirohito was born on April 29, 1901. He was the first son of Crown Prince Yoshihito, who later became the Taisho emperor, and the grandson of Mutsuhito, the Meiji emperor. Following long-established custom, Hirohito was separated from his parents shortly after birth. He was cared for under the guardianship of a vice admiral in the imperial navy until November 1904, when he returned to the Akasaka Palace, his parents' official residence.

Even from early years, Hirohito was trained to act with the dignity, reserve, and sense of responsibility his future role would require. He grew into a shy and grave young boy. In April 1908 he was enrolled at the Gakushuin (Peers School) in a special class of 12 boys, among them two of his imperial cousins. The head of the school was Gen. Maresuke Nogi, a celebrated soldier of the Russo-Japanese War. He took a personal interest in the education of the young prince and attempted to instill in him respect for the virtues of stoicism, hard work, and devotion to the nation.

Hirohito was appointed heir apparent on September 9, 1912, shortly after the death of his grandfather Mutsushito and the accession of his father Yoshihito to the throne. Hirohito lost his mentor when Nogi and his wife committed ritual suicide on the day of Mutsuhito's funeral. His education was continued under another military hero, Adm. Heihachiro Togo, who had won the victory over the Russian navy in 1905. But Hirohito never became as close to Togo as he had been to Nogi. In his studies he also had little patience with his tutor in history, who taught that the early myth of the founding of Japan by the sun-goddess was historical fact. Skeptical by nature and scientific in his interest, he found natural history more to his liking. Under the guidance of his natural-history tutor, who remained a lifelong mentor, he began to develop an interest in marine biology, a field in which he became an acknowledged expert.

On February 4, 1918, Hirohito became engaged to Princess Nagako, daughter of Prince Kuniyoshi Kuninomiya. Aritomo Yamagata and others raised objections to the match on the grounds that Nagako was descended from the daimyos of Satsuma, who had a strain of color blindness. The defect, they said, would taint the imperial line. But the imperial wedding finally took place on January 26, 1924. The imperial couple later had five daughters, the first born in December 1926, and two sons, the first born in December 1933.

In March 1921 Hirohito, accompanied by a large retinue, set off for a tour of Europe. The event was unprecedented, for it was the first time a crown prince of Japan had visited abroad. Although Hirohito traveled in France, the Netherlands, and Italy, his visit to England made the deepest impression on him. He was attracted by the freedom and informality of the English royal family. On Hirohito's first day at Buckingham Palace, King George V paid him an unexpected breakfast visit in suspenders and carpet slippers, and Edward, Prince of Wales, played golf with him and accompanied him on a round of official gatherings.

On November 25, 1921, shortly after his return to Japan, Hirohito was appointed to serve as regent for his father, who had begun to show increasing signs of mental derangement. In December 1923 Hirohito escaped an attempt on his life by a young radical.

Emperor of a Restless Nation

Hirohito acceded to the throne on December 25, 1926, and his formal enthronement took place in accord with ancient rituals in November 1928. He took as his reign name Showa ("Enlightened Peace"), and he was formally known as Showa Tenno.

The choice of reign name proved highly ironic for, shortly after Hirohito became emperor, Japan's relations with the outside world began to deteriorate. In 1927 Japanese army officers arranged the assassination of Marshal Chang Tso-lin, warlord of Manchuria, in hopes of provoking a Japanese takeover of the area. The young emperor, angered at the event, urged Premier Giichi Tanaka to discover and punish the culprits. He was equally indignant in September 1931, when elements in the Japanese army engineered the occupation of southern Manchuria under their own initiative. Encouraged by advisers like Count Nobuaki Makino and Prince Kimmochi Saionji, the Emperor privately urged moderation and caution on the army as it continued to deepen Japan's military involvement on the Asian mainland.

The Manchurian incident ushered in a period of profound domestic unrest. Dissident young military officers, often with the covert encouragement of their superiors, allied with civilian right-wing radicals to plot a series of unsuccessful coups d'etat and a number of successful assassinations. They hoped to overthrow party cabinets in order to establish a military regime that could govern in the name of "direct imperial rule."

Hirohito, however, believed himself to be a thoroughly human monarch, bound by the constitution his grandfather had promulgated in 1889. He saw himself as an organ of state rather than a personal autocrat and believed that the leaders of government should be men of moderation and non-militaristic in outlook.

During the military insurrection of February 26, 1936, when elements of the First Division occupied large areas of downtown Tokyo and assassination bands murdered many leading public officials, the Emperor urged swift suppression and punishment of the mutinous soldiers and the assassins. The uprising was crushed, and a number of ranking generals who were thought to have encouraged the rebels were forced into retirement.

The country nevertheless continued its drift toward war. In July 1937 hostilities with China broke out. During the late 1930s Hirohito's advisers in the palace bureaucracy had urged him to remain aloof from direct intervention in politics lest he compromise the position of the imperial family. The Emperor followed this advice, giving his consent to whatever policies the increasingly belligerent governments decided upon.

There is every evidence that the Emperor felt uneasy about the unfolding of events, particularly after 1940. He did not favor the alliance with Nazi Germany and Fascist Italy, but he made no effort to oppose it. Similarly, he had grown distrustful of the judgments of the military leaders who kept assuring him of a quick end to the war in China. But when the final decision on war with the United States was made on September 6, 1941, his opposition was confined to an oblique reference to one of his grandfather's poems, which expressed hope for peace.

During the war Hirohito refused to leave the imperial palace at Tokyo, even after air raids began to demolish the city and fires destroyed many buildings on the palace grounds. He wished to share the hardships of his subjects.

By the summer of 1945 it was clear to most informed public officials, including many military leaders, that defeat was inevitable. But the decision to surrender did not come until after atomic bombs were dropped on Hiroshima and Nagasaki. At a historic imperial conference on August 9, 1945, the Emperor made clear his determination to "endure the unendurable" and expressed his opinion in favor of surrendering to the Allies.

Following Japan's formal surrender in September 1945, there was much speculation about whether the Emperor would be punished as a war criminal. Hirohito himself frequently expressed his willingness to abdicate as a token of his responsibility for the war. But the American authorities, including Gen. Douglas MacArthur, decided that it would better serve the goals of domestic stability and internal reform of Japan to let him remain as ruler. On January 1, 1946, however, the Emperor once and for all gave up any claims to being a sacred monarch by issuing a rescript that denied his divinity as a descendant of the sun-goddess.

Emperor's Life as a Mortal

During the years of the occupation and afterward, every effort was made to "democratize" the throne by having the Emperor mingle with the people. At first, the Emperor was inept and ill at ease when he met his subjects. He won the nickname "Mr. Is-that-so?" because of his perfunctory comments on visits to factories and schools. Even though he was personally aloof and somewhat awkward in public, the Emperor nevertheless became a popular figure. Pictures of the imperial family and stories of their activities became steady grist for weekly magazine and newspaper copy.

A respected marine biologist with a number of books on that subject to his credit, the Emperor lived a modest, sober, and retiring life when not engaged in official functions. His son Crown Prince Akihito married a commoner in 1959, and the line of succession was assured through their son Prince Hiro. In 1972 Hirohito traveled to Europe and was met with hostile demonstrations. A 1975 trip to the United States resulted in a more friendly reception. Hirohito died on January 7, 1989, at the age of 87. Symbolic of his interest in science and in modernizing his country, Hirohito reportedly was buried with his microscope and a Mickey Mouse watch.