World War II Remembered: The Generals and the Admirals: Russian 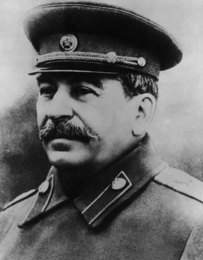 The Soviet statesman Joseph Stalin (1879-1953) was the supreme ruler of the Soviet Union and the leader of world communism for almost 30 years.

Under Joseph Stalin the Soviet Union greatly enlarged its territory, won a war of unprecedented destructiveness, and transformed itself from a relatively backward country into the second most important industrial nation in the world. For these achievements the Soviet people and the international Communist movement paid a price that many of Stalin's critics consider excessive. The price included the loss of millions of lives; massive material and spiritual deprivation; political repression; an untold waste of resources; and the erection of an inflexible authoritarian system of rule thought by some historians to be one of the most offensive in recent history and one that many Communists consider a hindrance to further progress in the Soviet Union itself.

Stalin was born Iosif Vissarionovich Dzhugashvili on Dec. 21, 1879, in Gori, Georgia. He was the only surviving son of Vissarion Dzhugashvili, a cobbler who first practiced his craft in a village shop but later in a shoe factory in the city. Stalin's father died in 1891. His mother, Ekaterina, a pious and illiterate peasant woman, sent her teen-age son to the theological seminary in Tpilisi (Tiflis), where Stalin prepared for the ministry. Shortly before his graduation, however, he was expelled in 1899 for spreading subversive views.

Stalin then joined the underground revolutionary Marxist movement in Tpilisi. In 1901 he was elected a member of the Tpilisi committee of the Russian Social Democratic Workers party. The following year he was arrested, imprisoned, and subsequently banished to Siberia. Stalin escaped from Siberia in 1904 and rejoined the Marxist underground in Tpilisi. When the Russian Marxist movement split into two factions, Stalin identified himself with the Bolsheviks.

During the time of the 1904-1905 revolution, Stalin made a name as the organizer of daring bank robberies and raids on money transports, an activity that V. I. Lenin considered important in view of the party's need for funds, although many other Marxists considered this type of highway robbery unworthy of a revolutionary socialist.

Stalin participated in congresses of the Russian Social Democratic Workers party at Tampere, London, and Stockholm in 1905 and 1906, meeting Lenin for the first time at these congresses. In 1912 Stalin spent some time with Lenin and his wife in Crakow and then went to Vienna to study the Marxist literature concerning the nationality problem. This study trip resulted in a book, Marxism and the National Question. In the same year Lenin co-opted Stalin into the Central Committee of the Bolshevik party.

Stalin's trips abroad during these years were short episodes in his life. He spent the major portion of the years from 1905 to 1912 in organizational work for the movement, mainly in the city of Baku. The secret police arrested him several times, and several times he escaped. Eventually, after his return from Vienna, the police caught him again, and he was exiled to the faraway village of Turukhansk beyond the Arctic Circle. He remained here until the fall of czarism. He adopted the name Stalin ("man of steel") about 1913.

After the fall of czarism, Stalin made his way at once to Petrograd, where until the arrival of Lenin from Switzerland he was the senior Bolshevik and the editor of Pravda, the party organ. After Lenin's return, Stalin remained in the high councils of the party, but he played a relatively inconspicuous role in the preparations for the October Revolution, which placed the Bolsheviks in power. In the first Cabinet of the Soviet government, he held the post of people's commissar for nationalities.

During the years of the civil war (1918-1921), Stalin distinguished himself primarily as military commissar during the battle of Tsaritsyn (Stalingrad), in the Polish campaign, and on several other fronts. In 1919 he received another important government assignment by being appointed commissar of the Workers and Peasants Inspectorate. Within the party, he rose to the highest ranks, becoming a member of both the Political Bureau and the Organizational Bureau. When the party Secretariat was organized, he became one of its leading members and was appointed its secretary general in 1922. Lenin obviously valued Stalin for his organizational talents, for his ability to knock heads together and to cut through bureaucratic red tape. He appreciated Stalin's capabilities as a machine politician, as a troubleshooter, and as a hatchet man.

The strength of Stalin's position in the government and in the party was anchored probably by his secretary generalship, which gave him control over party personnel administration--over admissions, training, assignments, promotions, and disciplinary matters. Thus, although he was relatively unknown to outsiders and even within the party, Stalin doubtless ranked as the most powerful man in Soviet Russia after Lenin.

During Lenin's last illness and after his death in 1924, Stalin served as a member of the three-man committee that conducted the affairs of the party and the country. The other members of this "troika" arrangement were Grigori Zinoviev and Lev Kamenev. The best-known activity of this committee during the years 1923-1925 was its successful attempt to discredit Leon Trotsky and to make it impossible for him to assume party leadership after Lenin's death. After the committee succeeded in this task, Stalin turned against his two associates, who after some hesitation made common cause with Trotsky. The conflict between these two groups can be viewed either as a power struggle or as a clash of personalities, but it also concerned political issues--a dispute between the left wing and the right wing of bolshevism. The former feared a conservative perversion of the revolution, and the latter were confident that socialism could be reached even in an isolated and relatively backward country. In this dispute Stalin represented, for the time being, the right wing of the party. He and his theoretical spokesman, Nikolai Bukharin, warned against revolutionary adventurism and argued in favor of continuing the more cautious and patient policies that Lenin had inaugurated with the NEP (New Economic Policy).

In 1927 Stalin succeeded in defeating the entire left opposition and in eliminating its leaders from the party. He then adopted much of its domestic program by initiating a 5-year plan of industrial development and by executing it with a degree of recklessness and haste that antagonized many of his former supporters, who then formed a right opposition. This opposition, too, was defeated quickly, and by the early 1930s Stalin had gained dictatorial control over the party, the state, and the entire Communist International.

Although always depicted as a towering figure, Stalin, in fact, was of short stature. He possessed the typical features of Transcaucasians: black hair, black eyes, a short skull, and a large nose. His personality was highly controversial, and it remains shrouded in mystery. Stalin was crude and cruel and, in some important ways, a primitive man. His cunning, distrust, and vindictiveness seem to have reached paranoid proportions. In political life he tended to be cautious and slow-moving. His style of speaking and writing was also ponderous and graceless. Some of his speeches and occasional writings read like a catechism. He was at times, however, a clever orator and a formidable antagonist in debate. Stalin seems to have possessed boundless energy and a phenomenal capacity for absorbing detailed knowledge.

About Stalin's private life, little is known beyond the fact that he seems always to have been a lonely man. His first wife, a Georgian girl named Ekaterina Svanidze, died of tuberculosis. His second wife, Nadezhda Alleluyeva, committed suicide in 1932, presumably in despair over Stalin's dictatorial rule of the party. The only child from his first marriage, Jacob, fell into German hands during World War II and was killed. The two children from his second marriage outlived their father, but they were not always on good terms with him. The son, Vasili, an officer in the Soviet air force, drank himself to death in 1962. The daughter, Svetlana, fled to the United States in the 1960s.

In successive 5-year plans, the Soviet Union under Stalin industrialized and urbanized with great speed. Although the military needs of the country drained away precious resources and World War II brought total destruction to some of the richest areas of the Soviet Union and death to many millions of citizens, the nation by the end of Stalin's life had become the second most important industrial country in the world.

The price the Soviet Union paid for this great achievement remains staggering. It included the destruction of all remnants of free enterprise in both town and country and the physical destruction of hundreds of thousands of Russian peasants. The transformation of Soviet agriculture in the early 1930s into collectives tremendously damaged the country's food production. Living standards were drastically lowered at first, and more than a million people died of starvation. Meanwhile, Stalin jailed and executed vast numbers of party members, especially the old revolutionaries and the leading figures in all areas of endeavor.

In the process of securing his rule and of mobilizing the country for the industrialization effort, Stalin erected a new kind of political system characterized by unprecedented severity in police control, bureaucratic centralization, and personal dictatorship. Historians consider his regime one of history's most notorious examples of totalitarianism.

Stalin also changed the ideology of communism and of the Soviet Union in a subtle but drastic fashion. While retaining the rhetoric of Marxism-Leninism, and indeed transforming it into an inflexible dogma, Stalin also changed it from a revolutionary system of ideas into a conservative and authoritarian theory of state, preaching obedience and discipline as well as veneration of the Russian past. In world affairs the Stalinist system became isolationist. While paying lip service to the revolutionary goals of Karl Marx and Lenin, Stalin sought to promote good relations with the capitalist countries and urged Communist parties to ally themselves with moderate and middle-of-the-road parties in a popular front against the radical right.

From the middle of the 1930s onward, Stalin personally managed the vast political and economic system he had established. Formally, he took charge of it only in May 1941, when he assumed the office of chairman of the Council of Ministers. After Nazi Germany invaded the Soviet Union, Stalin also assumed formal command over the entire military establishment.

Stalin's conduct of Russian military strategy in the war remains as controversial as most of his activities. Some evidence indicates that he committed serious blunders, but other evidence allows him credit for brilliant achievements. The fact remains that under Stalin the Soviet Union won the war, emerged as one of the major powers in the world, and managed to bargain for a distribution of the spoils of war that enlarged its area of domination significantly, partly by annexation and partly by the transformation of all the lands east of the Oder and Neisse rivers into client states.

Stalin died of a cerebrovascular accident on March 5, 1953. His body was entombed next to Lenin's in the mausoleum in Red Square, Moscow. After his death Stalin became a controversial figure in the Communist world, where appreciation for his great achievements was offset to a varying degree by harsh criticism of his methods. At the Twentieth All-Union Party Congress in 1956, Premier Nikita Khrushchev and other Soviet leaders attacked the cult of Stalin, accusing him of tyranny, terror, falsification of history, and self-glorification.