World War II Remembered: The Generals and the Admirals: Chinese 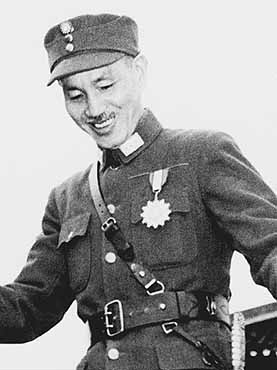 Chiang Kai-shek (1887-1975) was a Chinese nationalist leader. For 2 decades he was head of state on the Chinese mainland, and after 1950 he served as president of the Republic of China on Taiwan.

Chiang Kai-shek was born in Ch'i-k'ou, Chekiang, on Oct. 30, 1887. His father, a salt merchant, died in 1896, leaving his third wife with the burden of Chiang's upbringing. In 1905 Chiang went to Ningpo to study and decided on a military career. In 1906 he went to Tokyo but failed to qualify for military training. Returning to China, he studied at the Paoting Military Academy, continuing his military education in Tokyo at the Shikan Gakko Military Academy.

In Tokyo, fellow Chekiangese Ch'en Ch'i-mei sponsored Chiang's entry into Sun Yat-sen's revolutionary party, the T'ung-meng hui. When the revolution broke out in Wuhan on Oct. 10, 1911, Chiang returned to Shanghai to fight under Ch'en. A series of triumphs by Ch'en and other revolutionists in the lower Yangtze Valley set the stage for the installation in Nanking of Sun Yat-sen as provisional president of the Chinese Republic.

Ch'en Ch'i-mei and Chiang also fought in the 1913 abortive "second revolution," but by the end of the year both were back in Japan. In 1914 Chiang traveled to Shanghai and Harbin to undertake missions for Sun Yat-sen. In mid-1915 Ch'en and Chiang returned to Shanghai, but on May 18, 1916, Ch'en was assassinated.

In the fall of 1917 Sun Yat-sen moved to Canton, where he tried to establish a military base via an alliance with a local warlord, Ch'en Chiung-ming. Chiang was assigned to Ch'en's staff, but as a Chekiangese, Chiang was not readily accepted among Ch'en's Cantonese followers.

Between 1918 and 1920 little is known of Chiang's career. He and other followers of Sun engaged in financial speculation, and it was also at this time that Chiang established cordial relations with the "Green Gang," a secret society that wielded great power in the Shanghai underworld.

By early 1922 differences in policy between Sun and Ch'en had reached the breaking point and Sun and Chiang had to seek refuge on a gunboat. But before long, fortune turned once again in Sun's favor, and by February 1923 he was back in Canton. On April 20 Chiang assumed duties as Sun's chief of staff. Sun by now had turned for support to the revolutionary regime in Moscow, and Chiang headed a delegation to seek military assistance in the former U.S.S.R. Returning in December 1923, he soon was given an opportunity to put his newfound knowledge to use. When Sun's Kuomintang (KMT), reorganized along Leninist lines, held its first party congress in January 1924, Chiang was appointed to the Military Council.

On May 3 Chiang became commandant of the Whampoa Military Academy. There, with Soviet advisers and arms, Chiang organized a military elite, the Whampoa Clique, bound to Chiang by ties of personal loyalty. There too, by virtue of the KMT's united front with the fledgling Chinese Communist party (CCP), Chou En-lai and other future Communist luminaries gained experience as political commissars.

After Sun Yat-sen died on March 12, 1925, Chiang won out in the ensuing power struggle. With support from the chief Soviet adviser, Borodin, Chiang made the most of these circumstances and established himself on a par with Wang Ching-wei, the leader of the KMT's "left" wing. That Chiang's commitment to his radical allies was a matter of power rather than principle became apparent in the Chungshan gunboat incident of March 1926, when Chiang jailed alleged Soviet and Chinese Communist conspirators and forced Wang Ching-wei to retire. He also purged high party posts of leading Communists, including the acting head of the propaganda department, Mao Tse-tung.

Having consolidated his political position, Chiang prepared to carry out Sun Yat-sen's dream of national reunification. On July, 9, 1926, he became supreme commander of the Northern Expeditionary Forces. Chiang's troops struck northward through Hunan and Hupei, captured key Wuhan cities, and moved eastward through Kiangsi and Fukien toward the rich provinces of the lower Yangtze. Shanghai was occupied on March 22, 1927, Nanking on March 24. In less than a year Chiang had brought the wealthy and populous provinces of southern, central, and eastern China under Nationalist control.

However, success was complicated by new problems. A widening split had developed within the ranks of the expeditionary armies. On April 12, 1927, Chiang moved, swiftly and brutally, against Communists and Communist suspects in Shanghai, especially in the labor movement. This initiated a "party purification" movement that swiftly spread through other provinces controlled by Chiang or antipathetic to the Communists. On April 18 Chiang proclaimed a national government at Nanking in rivalry with the "left KMT" regime allied with Borodin and the CCP at Wuhan. Two months later Chiang precipitated the collapse of the Wuhan coalition with the cooperation of the powerful warlord Feng Yü-hsiang.

However, Chiang was unable to untangle the remaining political and military rivalries. He thereupon resigned his command and on Sept. 29, 1927, sailed for Japan to arrange his marriage to Soong Mei-ling. Chiang's bride was a member of a leading Christian family of Shanghai, and one of her sisters, Soong Ch'ing-ling, was the widow of Sun Yat-sen. As a condition of the marriage, Chiang agreed to study Christianity; he eventually became a devout Methodist.

The decade from 1928 to 1937 was peaceful only in comparison to what preceded it and what followed. Not a year passed without bloodletting among militarists, Nationalists, Communists, and Japanese invaders. For the Nationalist government these were, nonetheless, years of promise and accomplishment, and Chiang built up a formidable political and military machine. German advisers and arsenals helped build a modern army, which finally ousted the Communists from their principal base in Kiangsi and forced their decimated legions to flee to the distant northwestern periphery of China's heartland.

These were also years of promising developments in the urban sector of the country, especially in the lower Yangtze Valley and, until Sept. 18, 1931, Manchuria. With their emphasis on modern, urban development, the Nationalists secured the cooperation of many talented, foreign-educated intellectuals, and higher education flourished. At the same time Chiang initiated a "New Life Movement," seeking to infuse China's millions with enthusiasm for Confucian values revitalized with the spirit of puritanical Protestantism and military discipline. However, neither this nor the ideology of Sun Yat-sen provided an attractive alternative to Marxism. Moreover, two unresolved problems, the deterioration of rural China and the thrust of Japanese aggression, provided opportunities for the Communists.

Chiang, nonetheless, emerged from his first decade in power as the strong man of China. His good luck held when he needed it most. The Japanese, preoccupied with their conquests in Manchuria and adjacent areas of North China, slowed down the pace of aggression and appeared willing to come to an understanding. Chiang therefore concentrated on fighting the Communists and very often was able to capitalize upon the miscalculations of his rivals. Kidnapped at Sian on Dec. 12, 1936, by the Manchurian warlord Chang Hsüeh-liang, Chiang was forced to accede to Chang's demands that he join the Communists in a united front against Japan. But a fortnight later Chiang returned to Nanking a national hero.

During the first year of the Second Sino-Japanese War (1937-1945) Chiang's popularity soared. From August to December 1937 his German-trained armies fought a magnificent holding action around Shanghai and Nanking, allowing the government to withdraw briefly to Wuhan and, by the end of 1938, to Chungking. Proud and stubborn, Chiang symbolized China's dogged resistance against the Japanese juggernaut. His supremacy was confirmed in March 1938, when he assumed the title of Tsung-tsai (Party Leader)--successor to the Tsung-li(Party Director), Sun Yat-sen.

By 1941, however, the wartime élan was beginning to crumble. Inflation was sapping the country's economic and moral reserves, and the break with the CCP was almost complete. By the time the United States entered the war in December, war-weary Chinese were becoming disillusioned and cynical. The American alliance proved disappointing. Through the good offices of Roosevelt, Chiang was able to join the Great Powers in world diplomatic councils, but he received little respect from Churchill and Stalin. Chiang welcomed the efforts of Maj. Gen. Claire Chennault, whose Flying Tigers (the 14th Air Force) operated from Chinese bases, but Lt. Gen. Joseph Stilwell, the acerbic American chief of staff for the China-Burma-India theater, was a thorn in his side. When Chiang secured Stilwell's dismissal in October 1944, he could take but bleak satisfaction, for the last Japanese offensive of the war was cutting China in two and, in fact, validating Stilwell's criticisms. Even China's Destiny, Chiang's wartime political-historical treatise, was coldly received by Americans for its rejection of Western-style liberalism and democracy and its harsh condemnation of the unequal treaties.

By V-J Day, unresolved prewar problems exacerbated by wartime conditions had weakened Chiang's government and allowed Mao Tse-tung to expand control over a population of some 100 million Chinese. The Marshall mission, sent by President Truman on Oct. 27, 1945, to mediate between the two sides, failed to prevent the outbreak of civil war. Overconfident at the outset, Chiang committed serious blunders on the battlefield.

Chiang was also under pressure from political rivals at home and American critics abroad, who urged him to democratize his government. On Jan. 1, 1947, a new constitution was promulgated. An elected National Assembly chose Chiang as president, though the Kwangsi general Li Tsung-jen won the vice presidency over candidates more to Chiang's liking. But the pomp and ceremony in Nanking occurred against a backdrop of disaster, because by 1948 the tide of battle had turned against the Nationalists. Mukden fell on Nov. 1, 1948, followed 2 months later by Peiping. On Jan. 21, 1949, Chiang retired from the presidency, leaving Li Tsung-jen with the thankless job of trying to salvage something from a situation beyond repair. Unable to build a bastion of resistance in southern or southwestern China, Chiang retired to Taiwan on Dec. 10, 1949.

Many of the goals that eluded Chiang on the vast mainland came within reach on the island of Taiwan (Formosa). There he gained unchallenged and virtually unlimited power. The National Assembly, under emergency law, reelected him to the presidency. His elder son, Chiang Ching-kuo, was groomed as his successor. Dissenters were jailed under martial law. The rugged central mountain range was free of rebel bands, and alliance with the United States protected the island from invasion. After 1954 the island enjoyed a spectacular economic boom, making its standard of living second only to Japan's among the nations of Asia.

Although, Taiwan, the largest of all islands which comprise the Republic of China, had many perquisites of independent nationhood, Chiang Kai-shek was not a man to surrender his youthful dreams. His diplomats tenaciously held on to the "China" seats in the United Nations, because Chiang saw Taiwan not as a nation but as a model province, where the teachings of Sun Yat-sen were being tested in preparation for the recapture of the mainland. But in 1972 representatives of Communist China replaced those of Nationalist China at the United Nations, the same year Taiwan's National Assembly elected Chiang Kai-Shek to a fifth six-year presidential term.