The Immortal Life of Henrietta Lacks: About the Book

About the Book from Author Rebecca Skloot

About The Immortal Life of Henrietta Lacks

Her name was Henrietta Lacks, but scientists know her as HeLa. She was a poor black tobacco farmer whose cells—taken without her knowledge in 1951—became one of the most important tools in medicine, vital for developing the polio vaccine, cloning, gene mapping, in vitro fertilization, and more. Henrietta’s cells have been bought and sold by the billions, yet she remains virtually unknown, and her family can’t afford health insurance.

Soon to be made into an HBO movie by Oprah Winfrey and Alan Ball, this New York Times bestseller takes readers on an extraordinary journey, from the “colored” ward of Johns Hopkins Hospital in the 1950s to stark white laboratories with freezers filled with HeLa cells, from Henrietta’s small, dying hometown of Clover, Virginia, to East Baltimore today, where her children and grandchildren live and struggle with the legacy of her cells. The Immortal Life of Henrietta Lacks tells a riveting story of the collision between ethics, race, and medicine; of scientific discovery and faith healing; and of a daughter consumed with questions about the mother she never knew. It’s a story inextricably connected to the dark history of experimentation on African Americans, the birth of bioethics, and the legal battles over whether we control the stuff we’re made of. 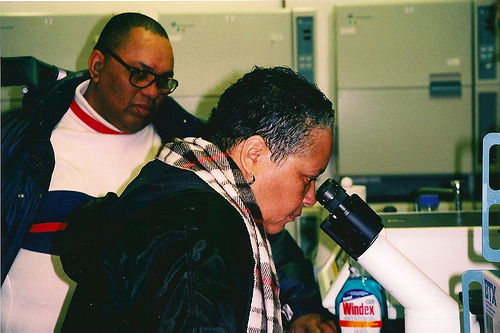 Deborah Lacks looking at her mother's cells for the first time, 2001, courtesy of Critics at Large http://www.criticsatlarge.ca/2012/05/in-every-person-universe-immortal-life.html

Elsie Lacks (born Lucille Elsie Pleasant) – Henrietta’s second born and eldest daughter. She was institutionalized due to epilepsy and died at age fifteen.

Johnny Pleasant – Henrietta’s father. He left his ten children when their mother died.

Tommy Lacks – Henrietta and Day’s grandfather who raised both of them.

Albert Lacks – Henrietta’s white great-grandfather. He had five children by a former slave named Maria and left part of the Lacks plantation to them. This section is known as Lacks Town.

Davon Meade – Deborah’s grandson who often lived with and took care of her.

Bobette Lacks – Lawrence’s wife. She helped raise Lawrence’s siblings after Henrietta’s death and advocated for them when she discovered they were being abused.

Cliff Garrett – Henrietta’s cousin. As children they worked the tobacco fields together.

Galen – Henrietta’s cousin. He and his wife Ethel moved in with Day after Henrietta’s death to help take care of the children. He ended up abusing Deborah.

Sadie Sturdivant – Margaret’s sister, Henrietta’s cousin and confidante. She supported Henrietta during her illness. She and Henrietta sometimes sneaked out to go dancing.

Members of the Medical and Scientific Community

Chester Southam – cancer researcher who conducted unethical experiments to see whether or not HeLa could “infect” people with cancer.

Christopher Lengauer – cancer researcher at Johns Hopkins who helped develop FISH, a technique used to detect and identify DNA sequences, and who reached out to members of the Lacks family.

Emanuel Mandel – director of medicine at the Jewish Chronic Disease Hospital (JCDH) who partnered with Southam in unethical experiments.

Dr. George Gey – head of tissue-culture research at Johns Hopkins. He developed the techniques used to grow HeLa cells from Henrietta’s cancer tissue in his lab.

Leonard Hayflick – microbiologist who proved that normal cells die when they’ve doubled about fifty times. This is known as the Hayflick limit.

Richard Wesley TeLinde – one of the top cervical cancer experts in the country at the time of Henrietta’s diagnosis. His research involved taking tissue samples from Henrietta and other cervical cancer patients at Johns Hopkins.

Roland Pattillo – professor of gynecology at Morehouse School of Medicine who was one of George Gey’s only African American students. He organizes a yearly HeLa conference at Morehouse in Henrietta’s honor.

Stanley Gartler – the geneticist who dropped the “HeLa bomb” when he proposed that many of the most commonly used cell cultures had been contaminated by HeLa cells.

Susan Hsu – the post-doctoral student in Victor McKusick’s lab who was assigned to make contact with the Lackses and request samples from them for genetic testing without informed consent.

Walter Nelson-Rees – the geneticist who tracked and published the names of the cell lines contaminated with HeLa without first warning the researchers he exposed. He became known as a vigilante.

Courtney “Mama” Speed – resident of Turner Station and owner of Speed’s Grocery. She organized an effort to build a Henrietta Lacks museum.

John Moore – cancer patient who unsuccessfully sued his doctor and the regents of the University of California over the use of his cells to create the Mo cell line.

Michael Gold – author of a Conspiracy of Cells. He published details from Henrietta’s medical records and autopsy report without permission from the Lacks family.

Michael Rogers – Rolling Stone reporter who wrote an article about the Lacks family in 1976. He was the first journalist to contact the Lackses.

Ted Slavin – a hemophiliac whose doctor told him his cells were valuable. Slavin founded Essential Biologicals, a company that sold his cells, and later cells from other people so individuals could profit form their own biological materials.