This guide will serve as a resource to students in Dr. Cieglo's World Civilization II course who are researching World War I. 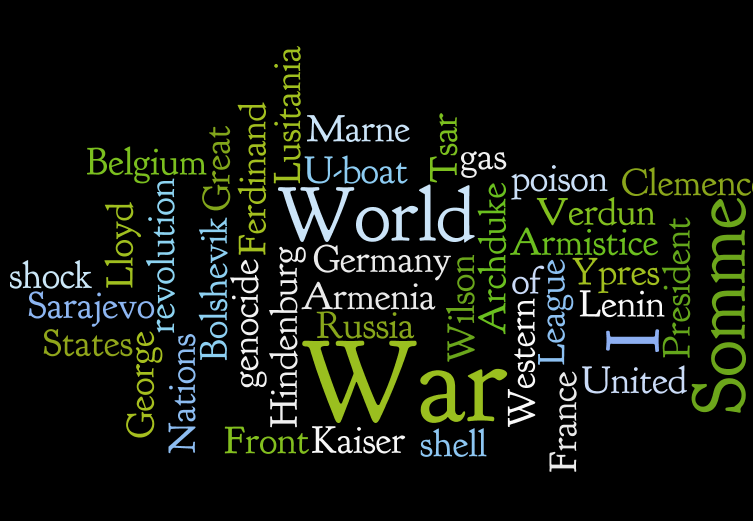 Secondary source - A books about the effects of World War I

Using primary and secondary source readings, answer ONE of the questions listed on the second page of this document in a 3-4 page paper.

In your paper, you must use and cite at least:

Pick ONE of the following research questions to answer in your paper (see the first page of this document for a full explanation of the requirements for the paper):

How did changes in technology and military strategy influence the experience of those serving on the battlefronts during the First World War?

NOTE: You can either focus on a single minority group in the U.S., such as Native-Americans, African-Americans, or Hispanic-Americans, or look at examples from a range of groups.

What role did propaganda play in the First World War and why was it so important to countries’ war efforts?

In what ways were women involved in the war during World War I? What changes in women’s political and/or social status resulted from the First World War?

What was the meaning of “Shell Shock” as used by doctors and intellectuals in the new field of psychology during and after WWI? What types of treatments did they use or recommend for “Shell Shock”?

What does post-war artistic culture (including literature, visual arts, film, and music) reveal about the legacies of the First World War and its impact on the societies involved in it?

NOTE: “Post-war” refers to the period between the end of World War I and the beginning of World War II. You may include examples from a number of countries or focus specifically on the artistic culture of one country or region. You may also focus on specific artistic media.